What is a refrigeration cycle and how does it work?

The following figure indicates the refrigeration cycle schematic with the above-mentioned processes, which can be also represented in the log(p)-h diagram, as shown in figure 1. These thermodynamic processes form a closed cycle called the theoretical Linde circuit, which is standard circuit for real compressor refrigeration systems.

As shown in fig. 1 the basic refrigeration cycle starts at point 1′. Here the compressor sucks the superheated refrigerant vapor through the suction pipe and starts to compress it. The pressure, temperature, and energy of compressed vapor rapidly increase. The specific volume, on the other hand, decreases significantly. Compression ends at point 2, which determines the parameters of vapor leaving the compressor. At this point, the temperature and energy of refrigerant vapor have the highest value in the whole cycle.

The distance between points 2 and 3 represents the process of cooling this superheated high-pressure vapor up to the point where it begins to condense. Its energy and specific volume decrease slightly. At point 3, the vapor is no longer superheated. Instead, it becomes 100% saturated (x = 1).

The condensation process is shown between points 3 and 4. It is a phase transition in which a saturated vapor gradually becomes a saturated liquid. During this process, a lot of energy is released in the form of heat, which must be rejected. Condensation occurs under constant pressure and temperature conditions and ends at point 4 where the quality “x” of refrigerant is equal to zero (x = 0).

It is usually recommended to make the liquid refrigerant slightly subcooled in practice. The subcooling process takes place from point 4 to 4’ and ensures that liquid refrigerant enters the expansion valve. With the subcooling, we also increase the specific cooling capacity (the segment between points 5 and 1 on the chart).

An expansion valve is used to decrease the pressure of the refrigerant, which enters it as subcooled liquid (point 4′) and flows out as a liquid-vapor mixture at point 5. The quality of this mixture has a value between zero and one (0 < x < 1). The expansion process is treated as an isenthalpic one – the energy (enthalpy, kJ/kg) of refrigerant is constant.

The line from points 5 to 1 indicates the evaporation process at constant temperature and pressure. The heat load from the cooled medium is transferred to the refrigerant via the evaporator heat exchange surface. Therefore, the energy of the refrigerant increases significantly. When all the liquid phase in the liquid-vapor mixture is evaporated, point 1 is reached, defining saturated refrigerant vapor (x = 1).

Finally, the saturated refrigerant vapor flows through the suction pipe. In this section, we control the superheating of the refrigerant, to make sure that the refrigerant entering the compressor will not contain the liquid phase.

The entire cycle ends at point 1′, where the specific volume of the superheated refrigerant is the highest, and where the compression process begins again.

Next
Compressors: Definition, classification, and types

Search
You may be interested in...
Refrigeration System basic conceptsCondensing unitsCompressor
Popular posts

Learn basic concepts and information about compressors. See their classification and understand the principle of operation.

Gain knowledge of what condensing unit is and how it works. Discover the basic components of its design and see the refrigerant flow path.

Learn the definition of a refrigerant and discover how the cooling effect is achieved. Find out what GWP and ODP factors actually are. 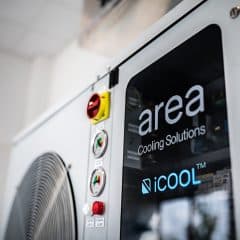 Discover the energy-saving technology. Learn about the inverter solution, its principle of operation, and main operational and cost-reduction benefits.

Cookies are important for you, they influence on your browsing experience, they help us to protect your privacyand allow us to proceed with your requests that you demand through the website. We use our own and third-party cookies to analyze our services and provide you with advertising related to your preferences on the basisof a profile made with your browsing habits (for example, visited pages). If you consent to its installation, click on"Accept Cookies", or you can also set your preferences by pressing "Cookie settings". More information in our"Cookies Policy".
Cookie settings ACCEPT ALL REJECT
Manage consent

Functional Always Enabled
Functional cookies help to perform certain functionalities like sharing the content of the website on social media platforms, collect feedbacks, and other third-party features.
Necessary Always Enabled
Necessary cookies are absolutely essential for the website to function properly. These cookies ensure basic functionalities and security features of the website, anonymously.
Performance
Performance cookies are used to understand and analyze the key performance indexes of the website which helps in delivering a better user experience for the visitors.
Analytics
Analytical cookies are used to understand how visitors interact with the website. These cookies help provide information on metrics the number of visitors, bounce rate, traffic source, etc.
Advertisement
Targeting and advertising cookies are specifically designed to gather information from you on your device to display advertisements to you based on relevant topics that interest you. Advertisers will place these cookies on a website with the website operator’s permission. The information the cookies gather on you can be shared with other advertisers to measure the performance of their advertisements.
Others
Other uncategorized cookies are those that are being analyzed and have not been classified into a category as yet.
Non Necessary
Any cookies that may not be particularly necessary for the website to function and is used specifically to collect user personal data via analytics, ads, other embedded contents are termed as non-necessary cookies. It is mandatory to procure user consent prior to running these cookies on your website.
Save & Accept